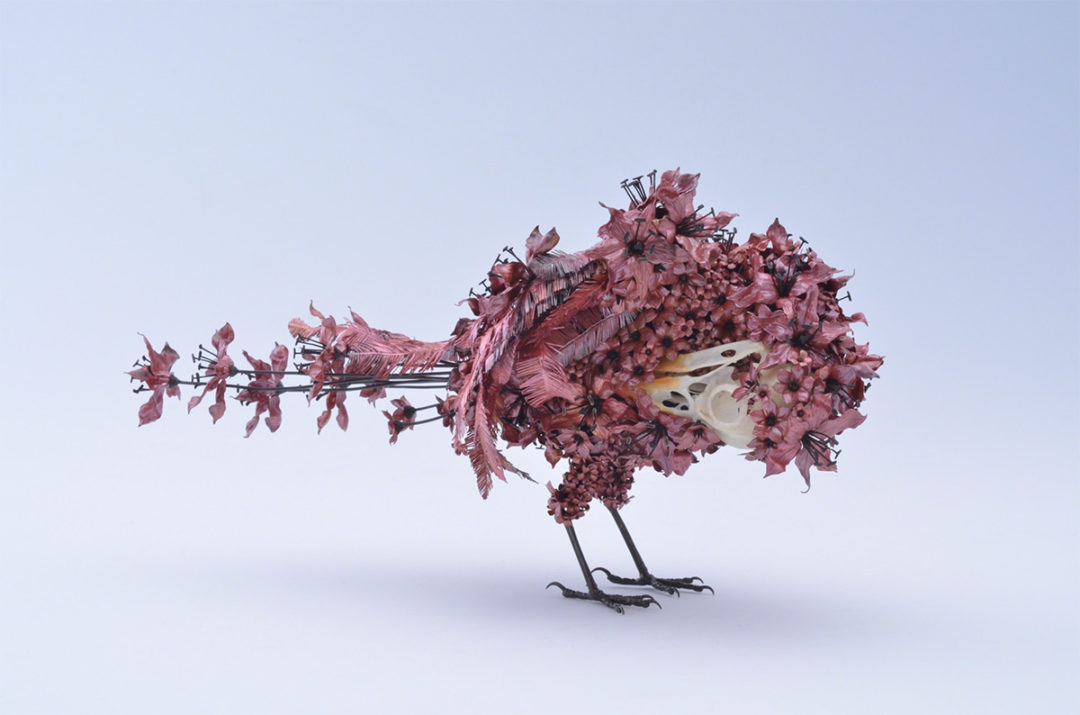 Artist Taiichiro Yoshida is known for his ability to create delicate bird wings, fluffy feathers, soft fur of mammals, or small and detailed leaves and flowers from non-standard materials such as bronze, honey and silver. 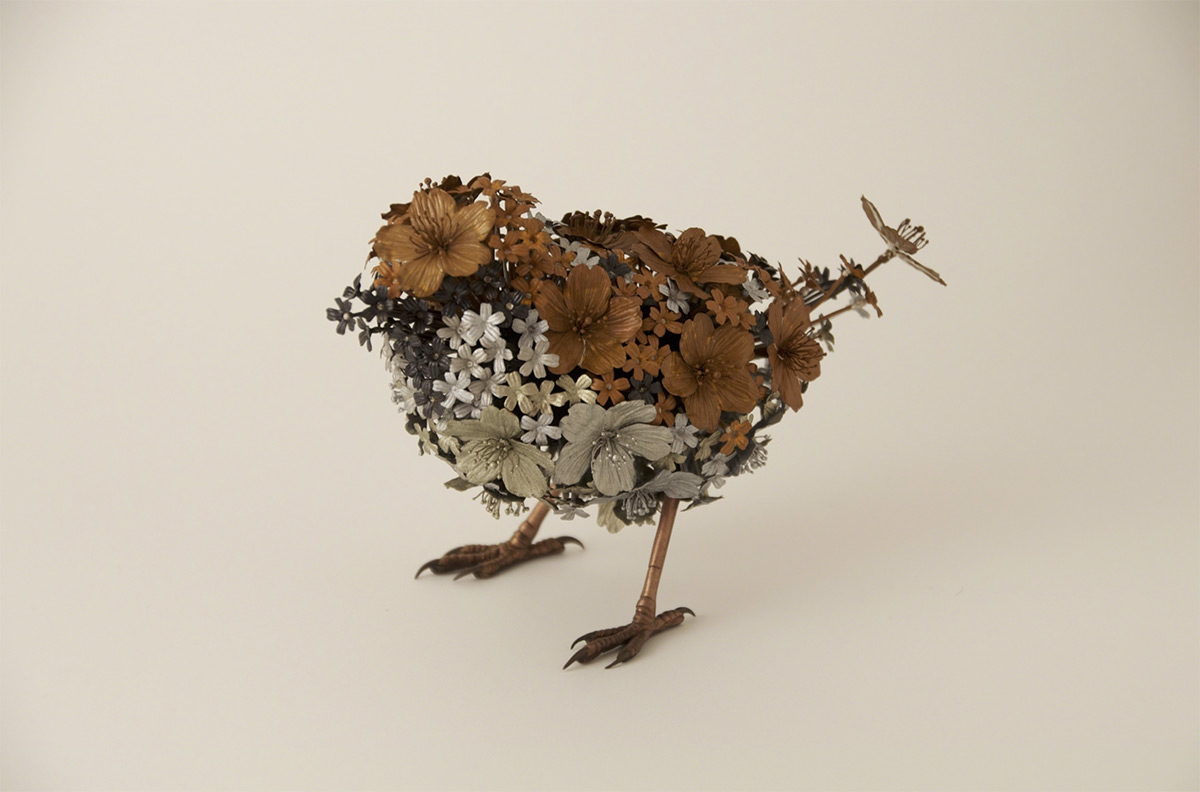 Decorative hot metalworking in Japan is considered an ancient technique that originated somewhere in the 2nd-3rd century BC. and has been developed, improved and refined for more than 2 millennia. 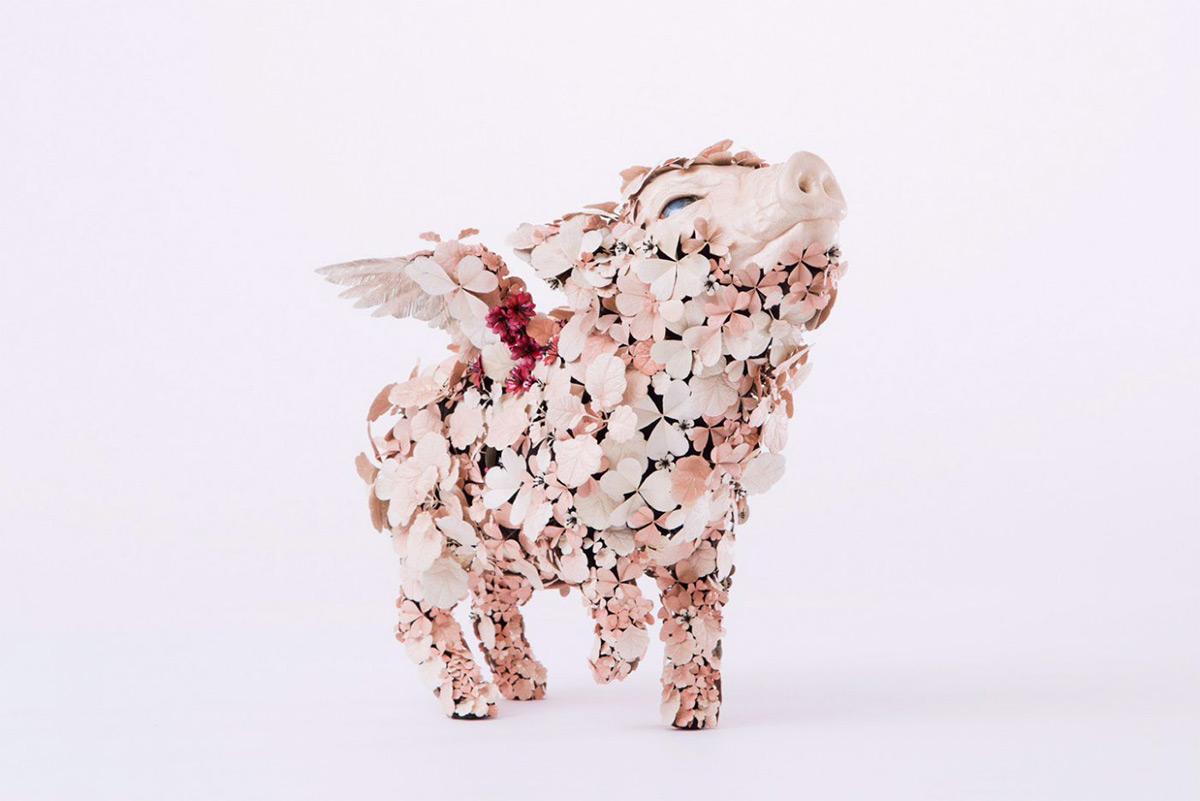 Yoshida’s works perfectly recreate the fragile nature of each individual element of the animal or plant the author attempts to portray through professional blacksmithing, through which the hot metal is carefully and delicately processed. Even the slightest mistake, inaccurate movement, too much pressure or insufficient pressure on the metal could destroy the artwork created by Taiichiro Yoshida. Once the metal is shaped the right way, it is unobtrusively and gently coloured in the conceptual colours of the particular work. 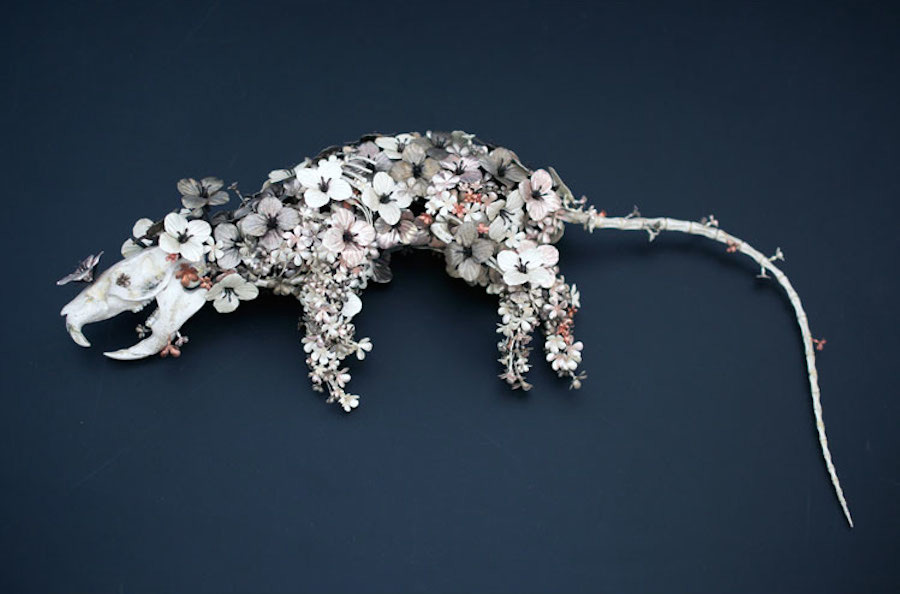 Monkeys, rabbits, cats, but mostly birds such as sparrows and pigeons are only a few of the animals he likes to portray in his artworks. They are covered with layers of different metal floral motifs or feathers in different colours. 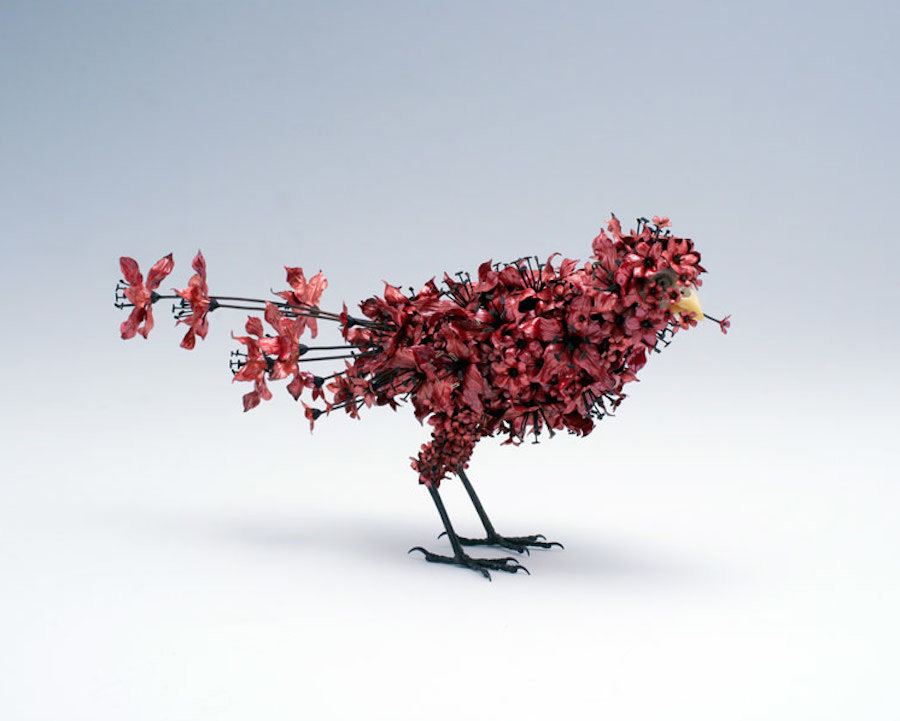 The metals in the work of Taiichiro Yoshida, such as copper and silver, are found in nature, although rarely, which according to the author creates a connection between the natural materials he uses and his works. Through something real, through nature’s creation is formed a creation of man that resembles nature’s majestic laws and ideas.

Each of his works follows an identical creative path, starting as a plastic base, then covered by metal flowers and other hand-made pieces which the artist creates using special forging tools. 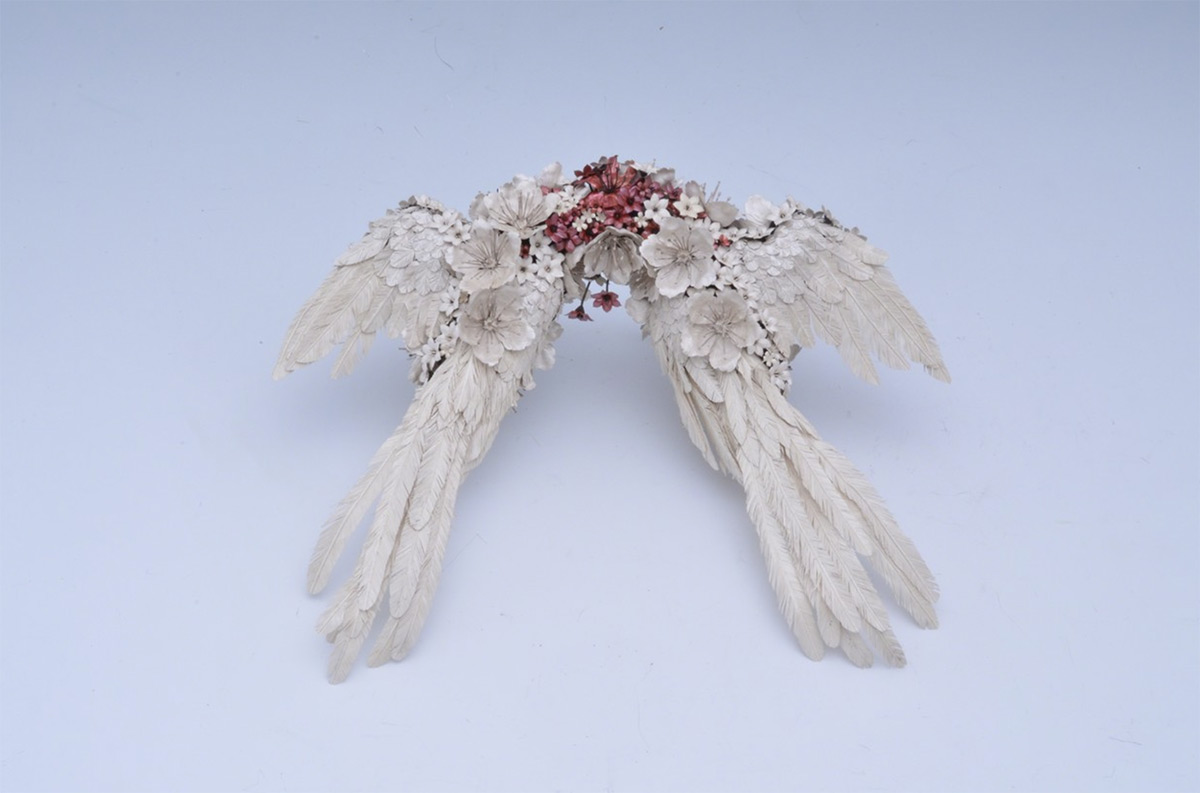 The result is beautiful, though sometimes disturbing, as the metal particles are included in the skull or represent the bones of an animal 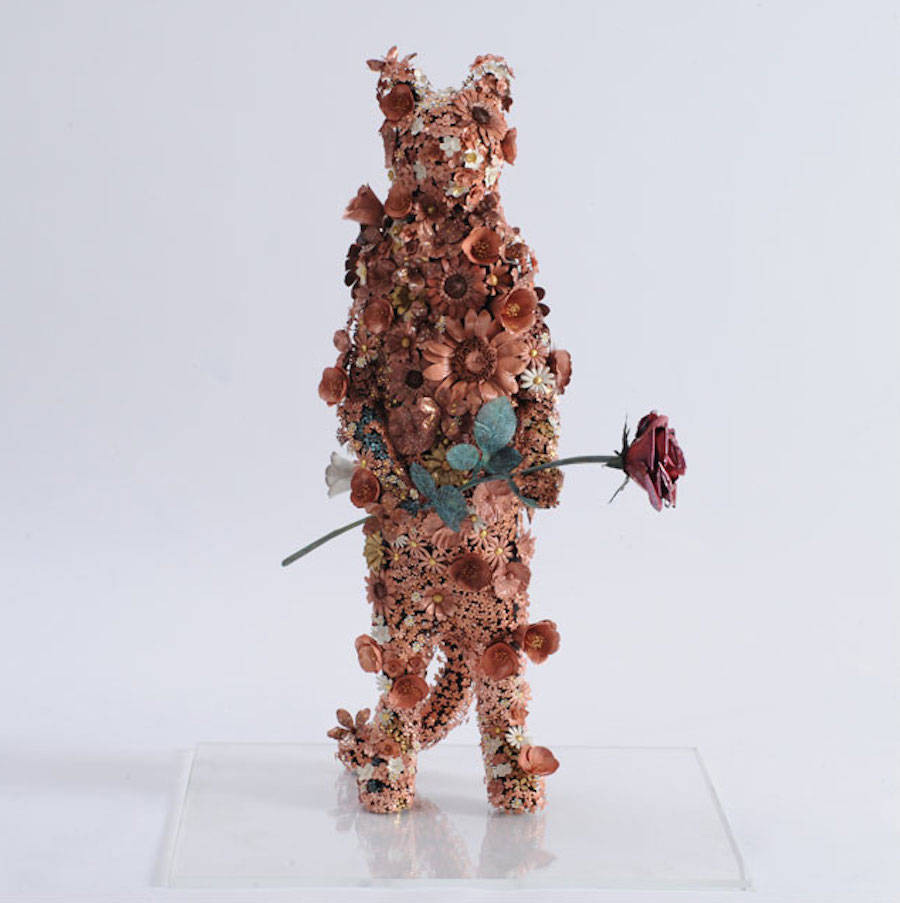 Yoshida’s works are somewhat surprising, as we still talk about a country where flowers are highly valued, creating their own art – Ikebana. Most commonly, Yoshida uses flowers such as sakura and chrysanthemum, which are national symbols of Japan, where it is believed that these flowers have the power to attract powerful positive emotions. 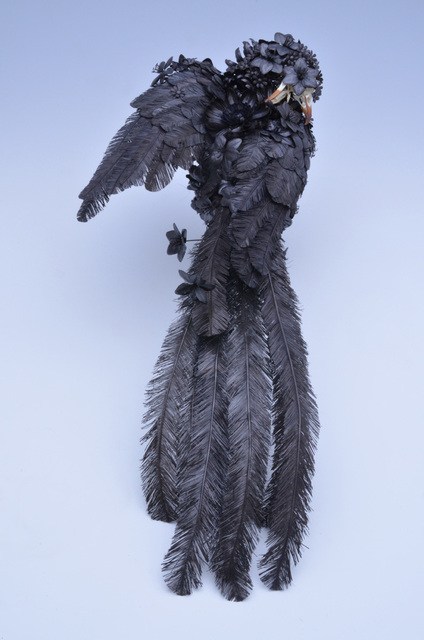 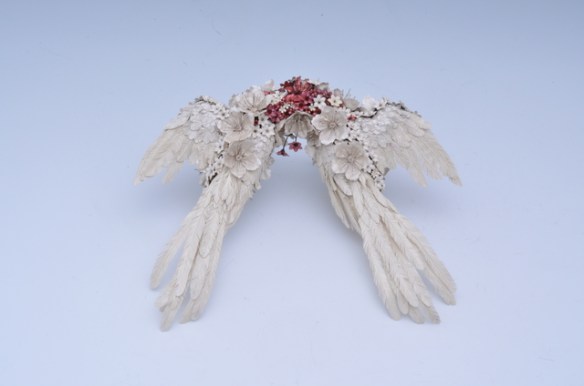 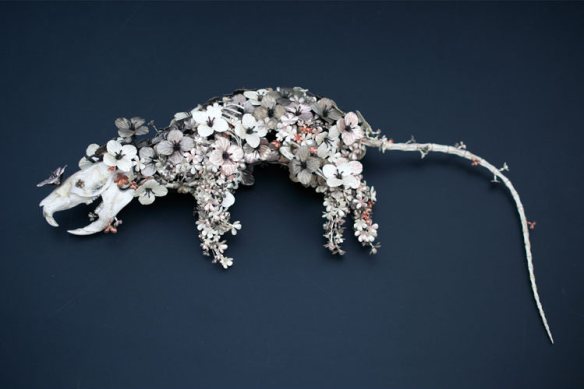